Vodafone wanted the finished project to provide a robust and efficient system which would provide smooth and stable water temperatures to the data halls.

The installation was to replace their aging scroll machines that were inefficient and struggling to provide smooth water delivery temperatures to the computer equipment rooms, for more modern, larger capacity chillers.

On inspection, the site also had a combination of DX refrigerant and chilled water computer room cooling equipment (CRAC units), resulting in a system that didn’t provide particularly efficient cooling and multi points of failure, especially on the DX systems.

The project was managed as a phased approach, replacing one chiller at a time over a period of four weeks to ensure the data centre had 100% up time throughout the transition to the new equipment.

Cooltherm installed the new Turbomiser chillers to match the original chillers cooling capacity of 280kW at 35% efficiency, with the capability to increase their cooling output to 400kW each.  The machines were designed to have a more compact width than the average chiller of this capacity to improve service and maintenance access within a restricted ground level chiller compound.

Upon inspection of the site it was discovered that the original 100kW indoor DX Computer Room Air Conditioning (CRAC) units were structurally in good condition, and had recently undergone EC fan conversion.

The project team set themselves the challenge to develop bespoke chilled water coils to replace the original DX coils, whilst maintaining the cooling duty and being careful not to increase the static air resistance the fans needed to overcome.

Cooltherm managed to uniquely develop a new valve control package to accurately control the air temperature provided by the units, integrating the new valve package with the original front end controller to ensure a seamless transition from DX refrigerant cooling to chilled water.

The new chillers and converted CRAC units can operate with precise capacity control through the   Turbomiser chillers ability to match the load KW per KW, and the new chilled water system is being operated with a variable chilled water volume, which means only the water flow needed by the building is pumped, resulting in more energy savings.

Rob Young, who headed up the project for Cooltherm said:

“The chillers alone are currently saving Vodafone 10% on their energy bill compared to last year, each percentage point saved, saves the client over £1000.00 per month.  To put this into context, between May and July they have already saved over £30k, this is due to the increased cooling load due to the adoption of the DX cooling CRACs, and the CRAC units using less than 20% of the power when they were operating as DX systems.

Always with green credentials in mind, 80kg of F-gas refrigerants has also been removed from site during the conversion process.” 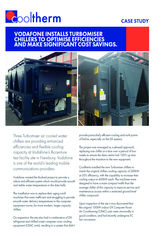